Working with sound recordist, Christine Felce, this is an analogue field recording made at night on 1st March 2010.

The Severn Bore is a tidal surge that sweeps up the estuary of the River Severn. At the time of the equinoxes, the bore is at its highest and roars along the river, swelling up and over the river’s banks. There are two main events you can hear in this recording: one is the surge of the tidal wave along the river, the second is the ringing of church bells in the distance which are swallowed by the immense noise of the wave. Around this are the details: a dog barking in the distance, something that sounds like a helicopter (but wasn’t), the glop and gurgle of the water as it rises up the muddy bank. 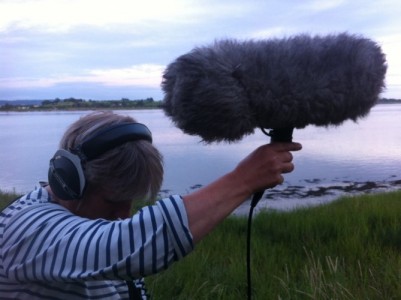 For the performance the room is almost in darkness. We introduce the field recording before playing it directly from the Nagra field recorder through two speakers. I encourage people to listen whilst lying on the floor in darkness.

For the gallery installation the recording is pressed onto vinyl with instructions penciled onto the record sleeve: put the record on, lie down and listen from beginning to end.