An essay by Colin Glen commissioned by Contemporary Art Society and Danielle Arnaud, 2013

Hegel believed that a person is not merely conscious of self and object as separate entities, but through the projections of the self via the mediation of the object is volitionally able to gain a deeper understanding of the self. All of which constitutes self-consciousness.[1] 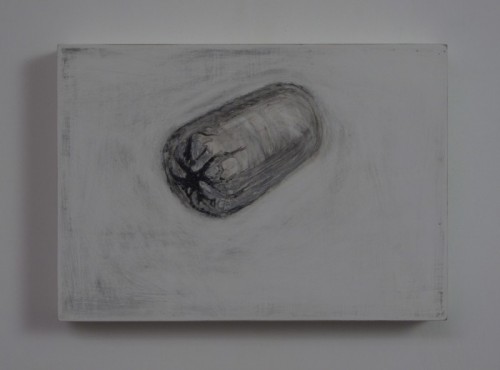 Louisa Fairclough’s recent series of drawings display the gossamer lightness of watercolour painting to its full potential as a medium suited to evoking the transient effects of light on landscape.  Yet their urgency of execution, the scores of near-neurotic little marks worked across the skin-like porosity of each gesso panels’ surface, betrays an ineluctable compulsion to connect with the solidity of things.[2]  Begun in 2009 as ‘Sleeping on the Severn’ the artist, often drawn by the full moon, camped out by the banks of the tidal river, making subsequent sketches of the effects of her temporary habitation on portable block-like panels.  Considering their intimacy and solidity the pieces act like little cairns – waymarkers on her travels – or relics holding the imprint of her emotions. Following her professed affiliation with the arte povera movement whose use of simple, ‘poor’ materials and the phenomenological approach of connecting the body with its environment, she considers what is to hand in her transient world. Such fundamentals as shelter and resting place were considered by Mario Merz and Pier-Paolo Calzolari when transferring physical material into the gallery. However Fairclough’s use of a traditional paint medium, now more often associated with the humble pursuits of the amateur, suggests a turn from grand artistic statement to connote instead the at once delicate and ferocious nature of personal sentiment.

Pivotal to appreciating Fairclough’s drawings is her use of her own spit to manipulate the paint. Although a not uncommon practice in open air painting – by listing it as a material she draws attention to the direct connection to the body – the mouth in particular.  By doing so when we observe the progression of the drawings from her musing over the sleeping sac as heavy leaden object in Lumpen, 2012, to Peep Hole, 2012, our attention is pulled towards the aperture formed by the bag’s drawstring. The frenzy of maniacal marks of the former that force your eye towards the central dark area with the gravitational draw of a vortex – transforms in the latter into an orifice emitting light[3] through the simple potent gesture of leaving the opening as blank gesso ground. This curious inversion is analogous to the artist’s journey in her work.  Where the dark centre relates to the focus on the grieving mouth[4] of Bore Song, 2011, the light aperture is akin to the beam of light thrown from the analogue film projector lenses in Song of Grief, 2011- its scatalogical associations moving from the repressed density of the rolled faecal lump to the incontinent weightlessness of the released sleeping bag of Wretched, 2012.

The relaxed handling of watercolour’s pooling quality seen also in the enigmatic Hermaphrodite Sleep pieces that suggest the body itself as a temporary shell for habitation, is a loosening of the previous drive to tightly fasten the animate to the solidity of the material.  This act of acceptance is a critical point in her work as it surpasses the original desire, when visiting the Lethe-like river, to throw the howl of grief to the opposite bank, to connect metaphorically with the dead.[5]  The pleasurable engagement with paint amounts to an acceptance of indeterminate state of being alive – an immersion in the fluid process of the passing moment – like the frames of film moving through the projector’s gate.

Fairclough’s relish in the palimpsest of film speaks of her fascination with structural cinema and its emphasis on the materiality of medium.  However, where a writer such as André Bazin promoted film’s indexical character – capturing the imprint of the real in the manner of the Turin shroud – she uses this concretion as form of cleansing.  Experience and memory are objectified precisely to let them pass like consecutive ripples on water.  Her sense of the animate is found in the act of making itself, the absorption in the painting process which her imagination inhabits like the sac or shelter.

The most pertinent discovery of Fairclough’s mental travels in her drawings is that just such an absorption in process is the experience of self-negation – of ‘losing yourself in the work.’  Where Cherry Smyth says,‘the work induces the metaphorical tussle between the darkening featureless despair and the illuminating insight that sorrow can bestow’[6]; we can see such an ‘insight’, such a ‘deeper knowledge of self’, as the move from the hollow vacuity of the dark centres of the sac to a place of clear open possibility of the empty light centres.  Weight of absence is transformed into lightness of absence.

[1]                These words are spoken by the female philosophy student working as a prostitute in Haruki Murakami’s 2005 novel Kafka on the Shore to her truck driver client Hoshino and seem to represent  a collapse of the base visceral into the intangibly cerebral, published by Vintage, p.295.

[2]               In this sense she engages with the mantra, ‘the ineluctable modality of the visible’ that Stephen Dedalus ruminates on in James Joyce’s Ulysses.

[5]          In Fairclough’s words, “On this journey I started to think about shouting across the water to the place where we’d camped the night before, talking back to my past self and calling across to the deceased.” Fairclough alludes to the Greek myth of Hypnos and Thanatos, who represent Sleep and Death respectively being the twin sons of Nyx and Erebos, Night and Darkness:

“…I am sleeping on the River Severn. It’s January, and the full moon seems vast. Here on the river I am singing my sister’s song.  As I sleep, my twin sister is sleeping on the far bank. My sleep is provisional, hers is final. She is my mute collaborator, but my collaborator nonetheless. We meet at night in darkness. Calling across to her, I sometimes think I hear her voice.  You come to me in glimpses with shards of your voice cutting off as I want to hear more. I can’t fix an image of you but I can hear your voice. If I listen too long, it becomes my voice…”

[6]          From her essay ‘Cutting the Skin of the Moment’ on the occasion of Fairclough’s Ground Truth show at Danielle Arnaud, November 2011.