Review by Ciara Moloney for thisistomorrow 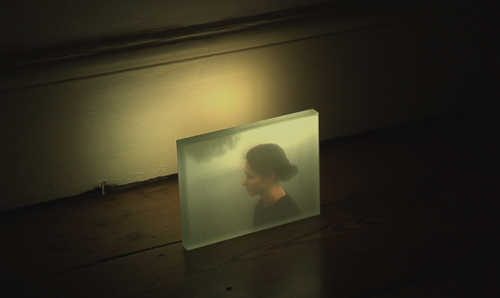 Louisa Fairclough explores ideas of loss and desolation in the setting of the River Severn through film, drawing and performance in ‘Ground Truth’ at Danielle Arnaud Contemporary. The most striking element of this exhibition are the sounds produced by the two 16mm film installations on the ground floor, which echo throughout the gallery. In the first, ‘Bore Song’ (2011), a young woman can be seen in profile against a body of water. As the waves swell and recede, a female voice, intoning a single sombre note, rises and is silenced, whereupon the water grows still. The film is projected against a small block of glass on the ground which necessitates crouching and peering in at the image. While this positioning of the viewer was clearly deliberate, it felt awkward and intimate.

The sound of the next work ‘Song of Grief’ (2011) – a mournful call – bleeds into ‘Bore Song’, weaving inextricably with the woman’s keening. In the next room the work comprises a pair of 16mm film projectors placed at head height on plinths opposite one another with the projector speakers on the ground. In an installation more sculptural than cinematic, reams of blank film are spun out across the entire expanse of the room. This produces two panes of light at either side of the room, shimmering like sunlight playing off waves. This contrast, between the ethereal beauty of Fairclough’s images and the warning sounds of her recordings, invokes the dangerous allure of water – capable, equally, of supporting bodies and of dragging them to watery graves.

Upstairs, a series of watercolours depicting tents, bivouacs and sleeping bags provides relief from the laments of the ground floor and the noisy ticking of the projectors. The delicacy of these small works, painted in muted tones and with titles such as ‘Refuge’ (2011) and ‘Survival Shelter’ (2011), indicates the futility of man’s attempt to fend off nature by erecting comforting and secure environments.

In ‘Ground Truth’ Fairclough has created a mysterious and haunting exhibition, eschewing classical representations of death as honourable sacrifice in favour of a highly personal expression of loss and desolation (the use of 16mm film to convey this, a medium facing extinction in the UK at least, is hardly coinicidental). Ultimately, the film installations are the most impactful, their anguished cries resembling a kind of primal therapy which strikes a chord at an instinctive level. How can words articulate absolute annihilation? These ‘songs’ are more articulate of profound grief than the most carefully scripted eulogy and highlight the inadequacy of language in the face of the sheer nullity of death.