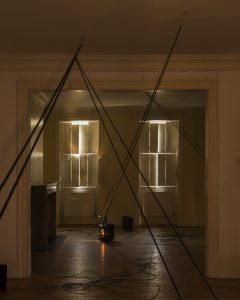 FEAR LIFE DEATH HOPE (2017) took as its starting point a found drawing from a sketchbook by the artist’s deceased sister which sampled words from an artwork by Gilbert & George. Interpreting the drawing as a sonic score, Samuel Middleton sung the words as glissandi in a derelict building on the site of the former psychiatric hospital, the words recorded layer upon layer as a composite on a series of tape loops by musician George McKenzie. The recording materialises within the gallery as lengths of 16mm film that rise from four projectors creating a spatial and sonic drawing. Vocal harmonies emit from the bodies of the projectors, but the lamps cast no light – the film having been exposed with no image. A collaboration with composer Richard Glover. 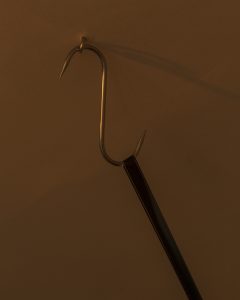 Shown in A Song Cycle for the Ruins of a Psychiatric Unit, Danielle Arnaud, 2017