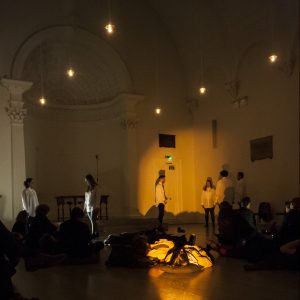 Devised by Richard Glover and Louisa Fairclough. A new work for an ensemble of six singers, VOICE IMAGES, 2017 incorporates three distinct compositions or ‘voice-images’; sonic representations of delirium. Each ‘voice-image’ is designed to be modular — in conversation harmonically and timbrally with one another. During the performance up to three compositions occurred simultaneously: from the quiet incisive sonority of two singers performing a duet to the polyphonic harmonies of several compositions occurring at one time. The intensity and audible perceptibility of these pieces transformed throughout, altered by the singers’ movement and proximity to each other within the space. Performed by Dieci Voices. 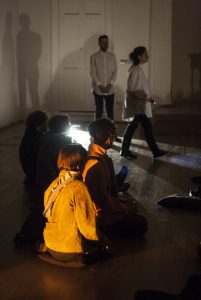 VOICE IMAGES was commissioned by Being and Appearing, a new programme of contemporary art at Swiss Church, London and funded by ACE.