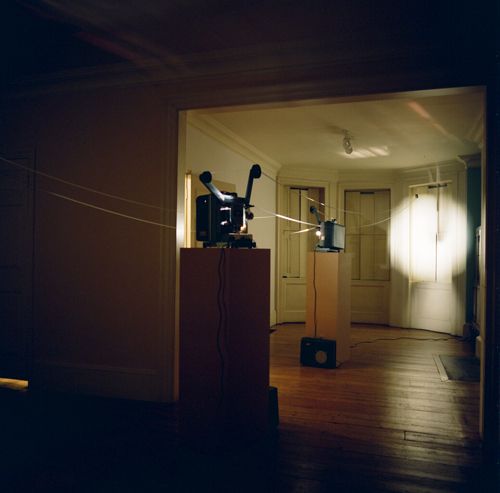 “…the simplicity of materials producing a magic as the light caught the transparent filmstrips and created wave patterns that reflected onto the wall, yet like the conjuror, the illusion is perhaps most pleasurable as you can see how it is done.”  Malcom Le Grice

“… Fairclough runs two 16mm projectors almost face to face, each projecting an empty frame on to the opposite wall and each projecting the same pitched note at different intervals. As in Bore Song, she has made the sound into a diagram…This elegant, vibrant criss‐crossing acts as a sculpted soundscape, where the wave of Bore Song becomes the ribbons of belting strips of film, running imagelessly through the gallery. The 16mm film itself catches the light, quivers as if battered by the wailing sound, as if trying to measure the height, depth and width of grief itself ‐ something digital sound and projection could not attempt. But Fairclough’s return to analogue is not nostalgic rather she employs the racket of the standing‐off machines to heighten the wearying, pointless repetition – an apt metaphor for the tireless assault of bereavement on the body and the defiant refusal to submit to its rules, its truth…

Walk into the beam of light and you appear as a dark ghost on the wall; turn towards the light and you are blinded. This experiential interaction with the work induces the metaphysical tussle between the darkening, featureless despair and the illuminating insight that sorrow can bestow. The wild fury of the piece encapsulates the rage of separation and futility of death and gives over to the permission to howl and to keep howling. The blank frames accentuate the absence but also the eradication of the memory of the absent one. If the blankness replicates the loss, the noise activates it. Unresolved, unresolvable, this arduous, staggering blast of a work invents a sculptural space for grief to do its exhaustive and exhausting work.” Cherry Smyth

Thank you to Darbyshire Framemakers for the plinths

Made on a residency at Meantime Project Space in February and May 2011. Shown in a solo show at Danielle Arnaud, London Nov-Dec 2011; Ha Gamle Prestegard, Norway, Jun-Aug 2012 and onto Camden Art Centre, London, Feb 2013.